I was in Morocco just for two days so I decided to stay one day in Marrakesh and take a trip to some other place the following day.  Moroccan travel agencies offer a great variety of one day trips from Marrakesh. I chose a trip to Essaouira. Essaouira, formerly known as Mogador, is an old town on the Atlantic coast. Atlantic ocean was the main reason why I had chosen to go there. Oceans/seas are a majestic force of nature and yet they are still capable to calm me down. I could spend hours watching them. 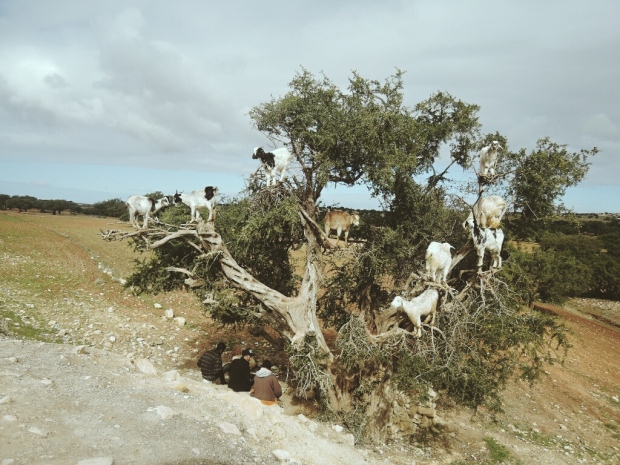 The journey to Essaouira took roughly three hours. I was enjoying the views from the bus, especially over the Atlas mountains, so it didn’t seem to be a long journey at all. I was secretly hoping to see the famous tree goats of Morocco. And I indeed saw them! Another dream crossed off my list. If anyone is wondering what the goats are doing on those trees, they are eating the fruits of argan trees 🙂

Here are some pictures I took on the way to Essaouira. As you can see a moving vehicle is not the best friend of my camera 😀

Our second stop on the journey was in Afous Argan cooperative, a place where women make argan oil products. They showed us how they produce the oil from the seeds and we could even try some of the products. I didn’t buy anything there, I found the prices of argan products in Essaouira and Marrakesh way cheaper. But it was still a very nice experience.

The products we tried.

We arrived to Essaouira. There were seven or nine other people (I can’t remember the exact number, it was a year ago :D) with me on this trip. Everyone was in a pair except me and one girl who was also travelling alone. I asked her if we could visit the town together. This girl, Monika was her name, turned out to be a very great company and she was from Poland so I was pleased to meet my “neighbour” 🙂

First, we went to take a stroll on the beach. There was a man selling camel rides who came to us. We weren’t interested in it at first. Then the man said he would give us a 50% discount if we would write a positive reference on his tripadvisor page. We couldn’t ignore such bargain and we said yes to the camel ride. I’m always up for anything crazy so that was a great opportunity how to experience something new and where else would I try riding a camel? There are no camels in Slovakia after all 😀 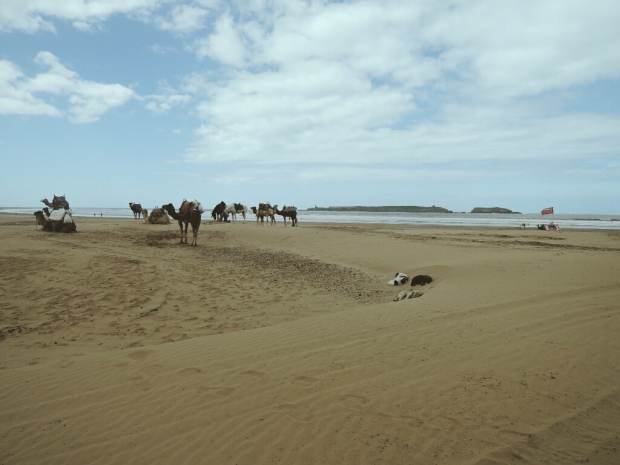 The man took us to his camel herd. His son was supposed to be our camel rider. Our camels were called Tarzan and Chocolat. I can’t decide which moment was more difficult; to climb on the camel, to ride it or to climb down from the camel. Fortunately, our ride was only one hour long. I can’t imagine going to desert for two days and ride this animal, kudos to everyone who did that! After approximately 30 minutes I sort of accustomed to the camel’s back. The scary part came when our rider left us on a high sand dune and went down the dune. For a moment I thought Tarzan would decide to follow his master and go down 😀 But since Tarzan was a very wise animal he stood calmly where his master had left him. I have to add that our rider was a really skilled photographer. I bet he has a great practise of taking pictures of tourists on the camels.

My camel Tarzan on the right. 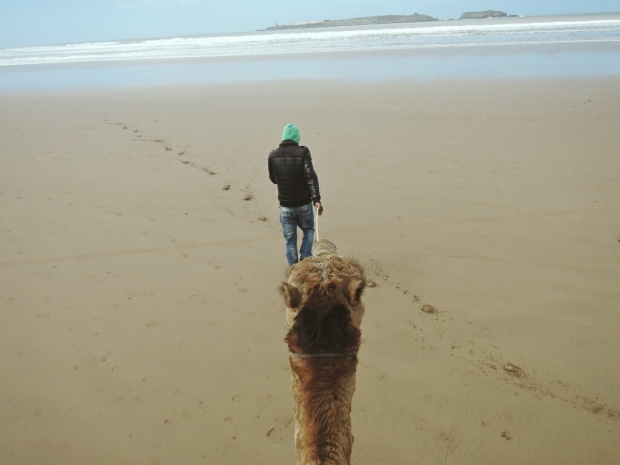 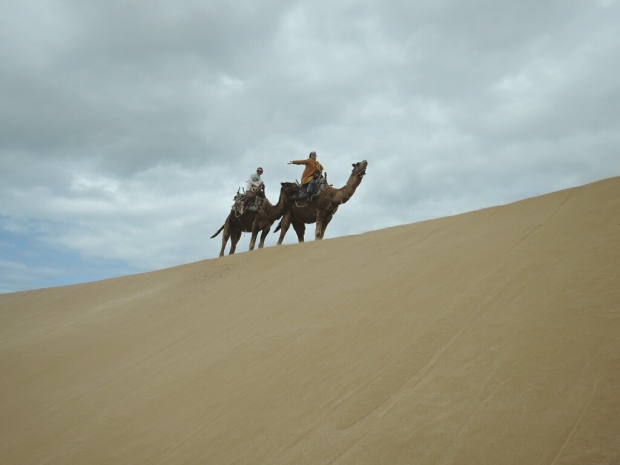 Up on the dune that scared me at first. 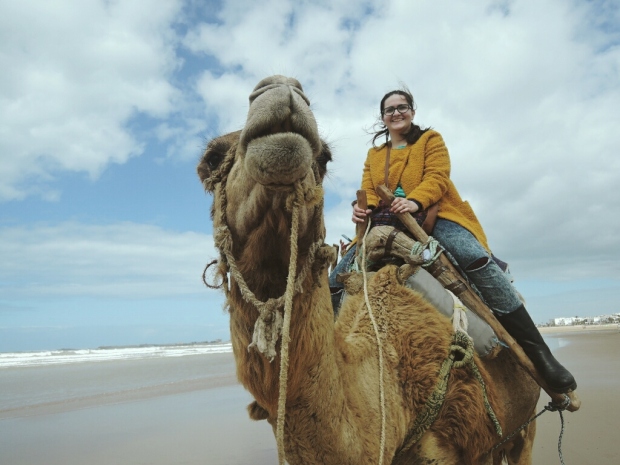 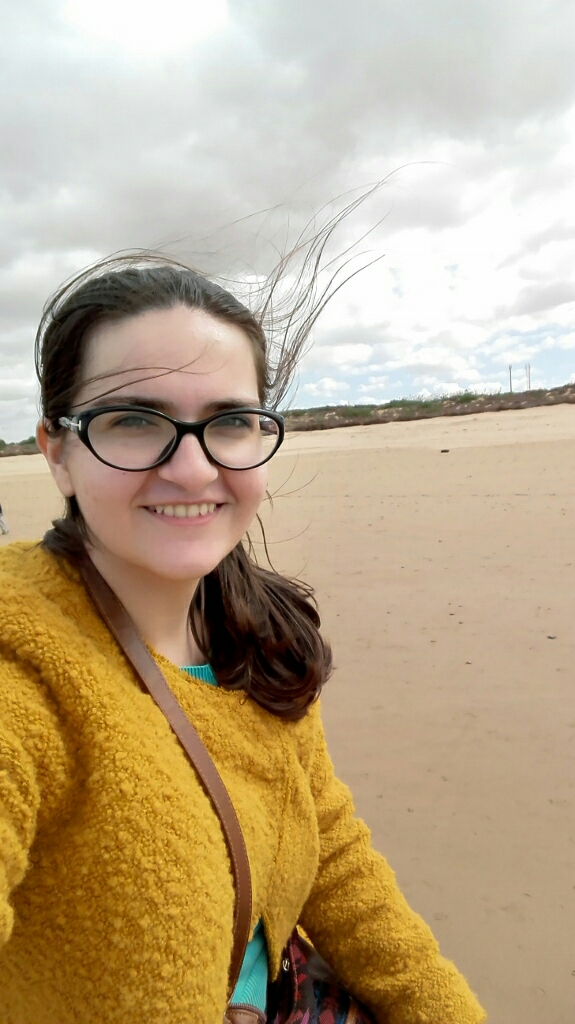 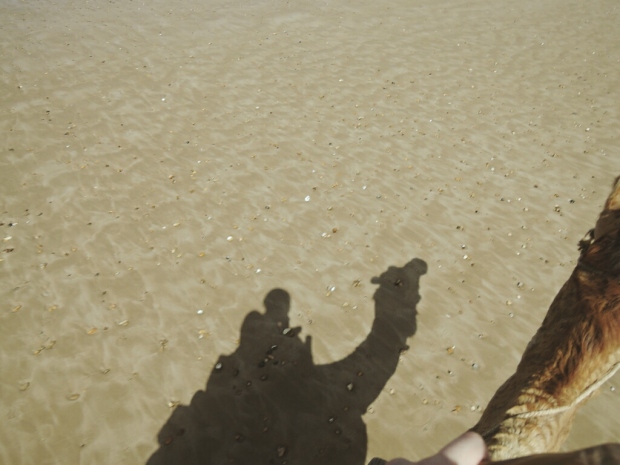 After the camel ride on the beach we went to explore the town. But first I had to check out the ocean 😀 Our first impression was that Essaouira was such a calm town. Especially when you compare it to Marrakesh. We went for a lunch. I had a menu consisting of a vegetable soup, fish tajine and some desert. Tajine is a traditional moroccan dish named after a special looking pot where it is cooked.

Of course I had to try the ocean and immerse my hand into the water. 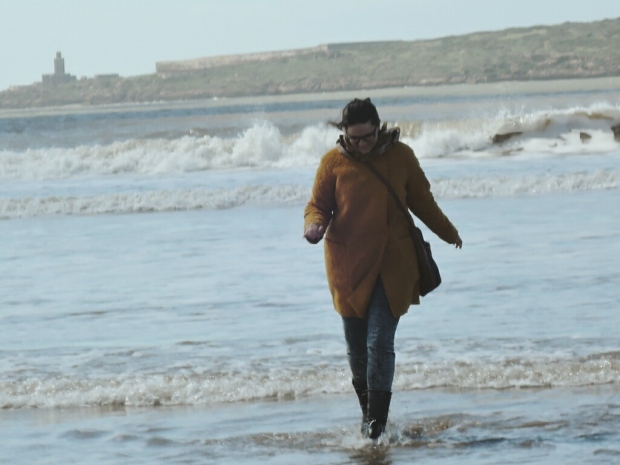 Me running from the waves. Good that I had such high boots because otherwise my feet would have been all wet. 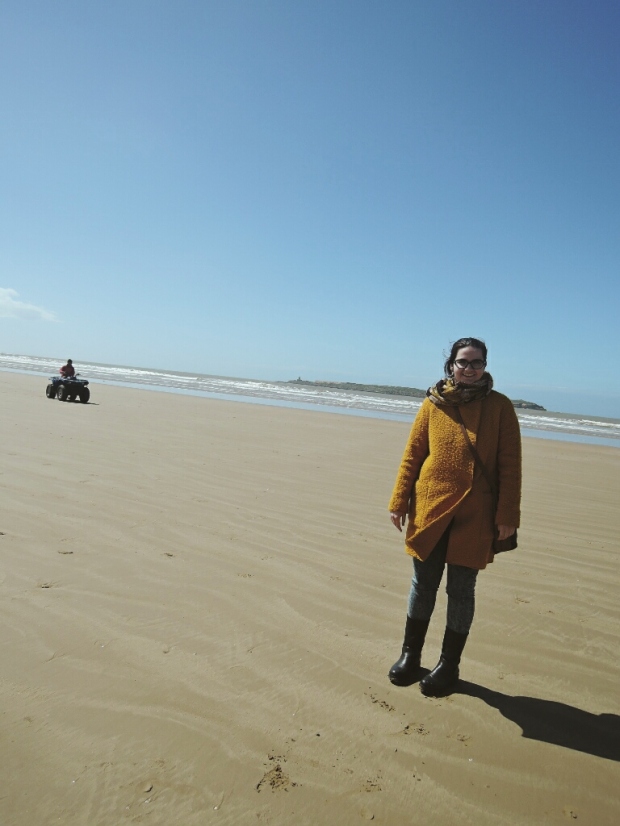 The guy on the left came to us and asked if we wanted a ride on the four wheeler. Another possibility was a horse ride. We thought that camel ride was enough for one day 😀 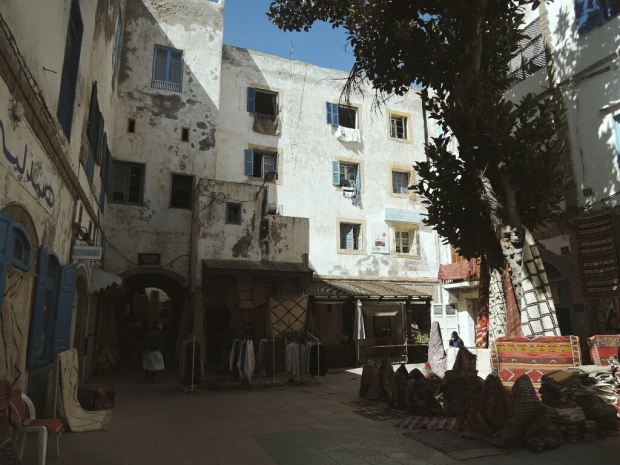 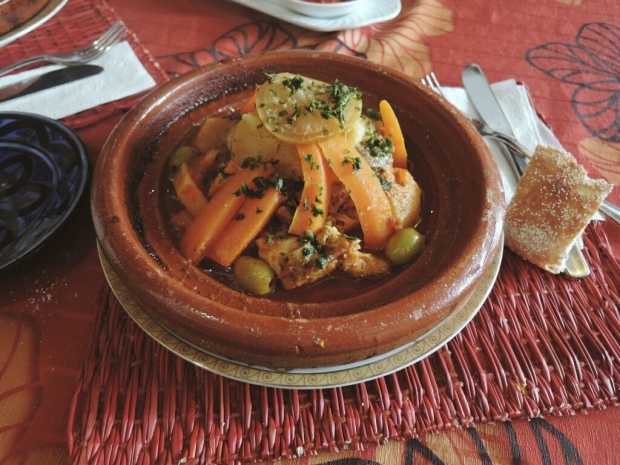 After the lunch we didn’t have a lot of time but we still managed to do some souvenir shopping and walk around the town. I bought some colourful bowls for my relatives, extremely cheap sweets for my parents and the best mint ice cream ever for me 😀 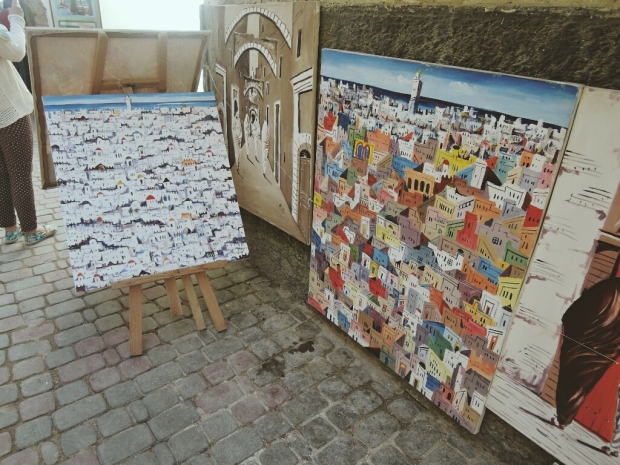 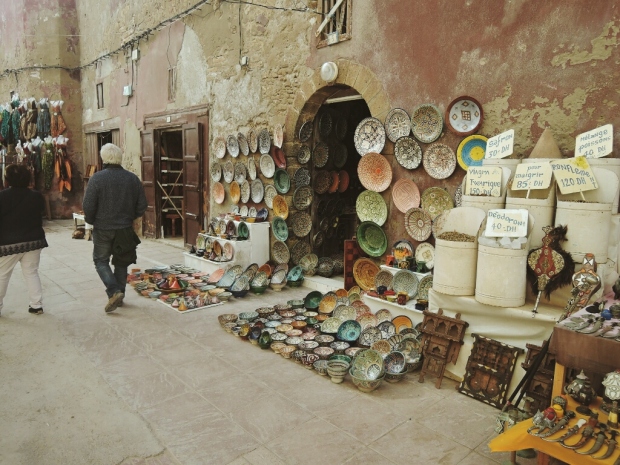 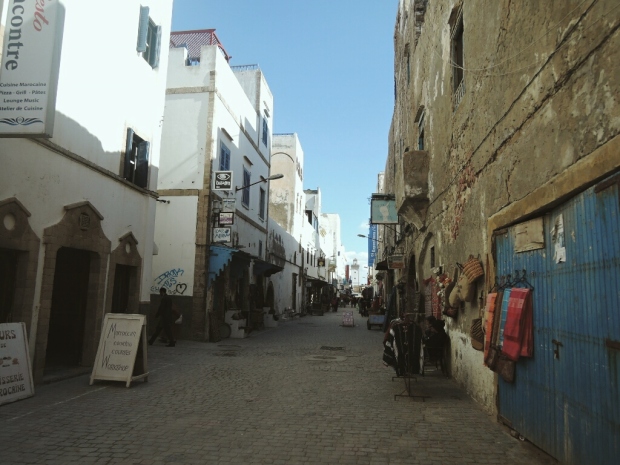 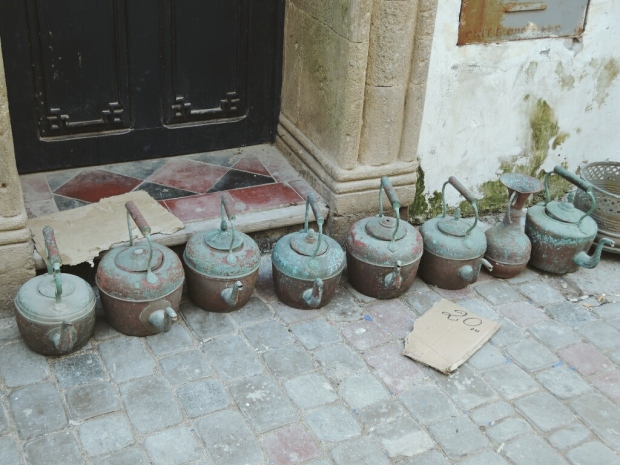 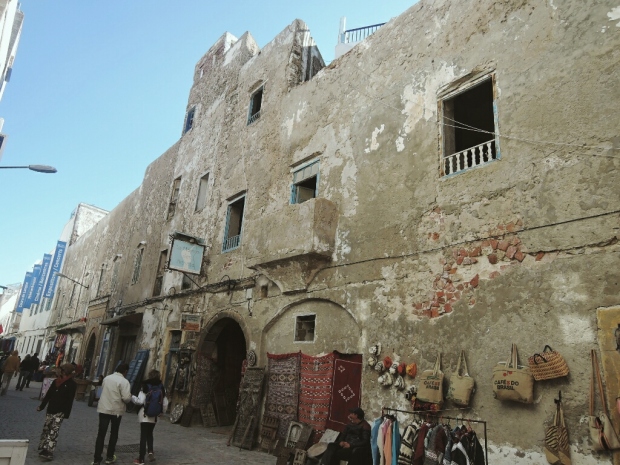 Essaouira or the city of cats, cats were everywhere. 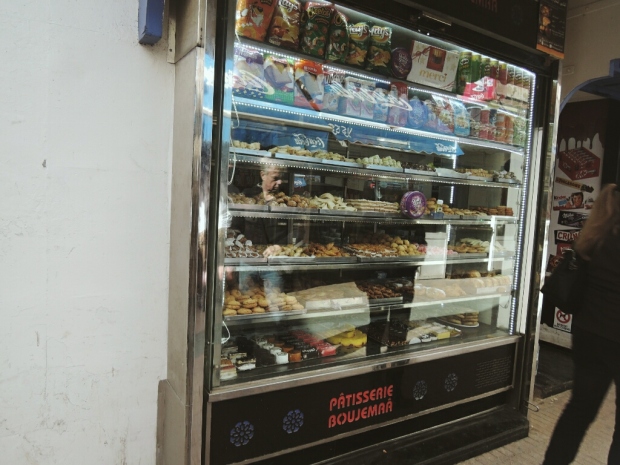 Heaven for people who love sweets.

I got pistachio and mint. The mint one was probably the best ice cream I have ever had.

On our way back we stopped at a shop/restaurant/garden sort of place which was full of flowers and oranges.

My two days in Morocco were over and I was going back to Milan (with no place to stay at, lol). I was glad that I went there but sad at the same time cause I didn’t have enough time to visit more places. Which is a good reason to come back to Morocco again but this time when the temperature will be higher than 15 degrees 😀

I couldn't resist to take a picture with this beautiful plumeria in Senegal 😁🌸
In front of Musée du Louvre in Paris, the largest museum in the world 🇨🇵
On top of La Tour Montparnasse pretending I'm singing in the rain with the fake umbrella 😂
Missing Paris like crazy 🇨🇵